We noticed that you're using an ad-blocker.

Spectator is a registered 501(c)3 nonprofit organization. We use advertising revenue to subsidize the cost of providing journalism to the campus, and to fund over fifty students who are on our work-study program.

Please consider helping us out by whitelisting our site in three easy steps.

If you're using AdBlock Plus:

If you're using UBlock Origin:

SUBMIT A TIP | SUBMIT AN OP-ED

Thirteen Barnard students have self-isolated upon returning from China

Thirteen Barnard students have self-isolated upon returning from China 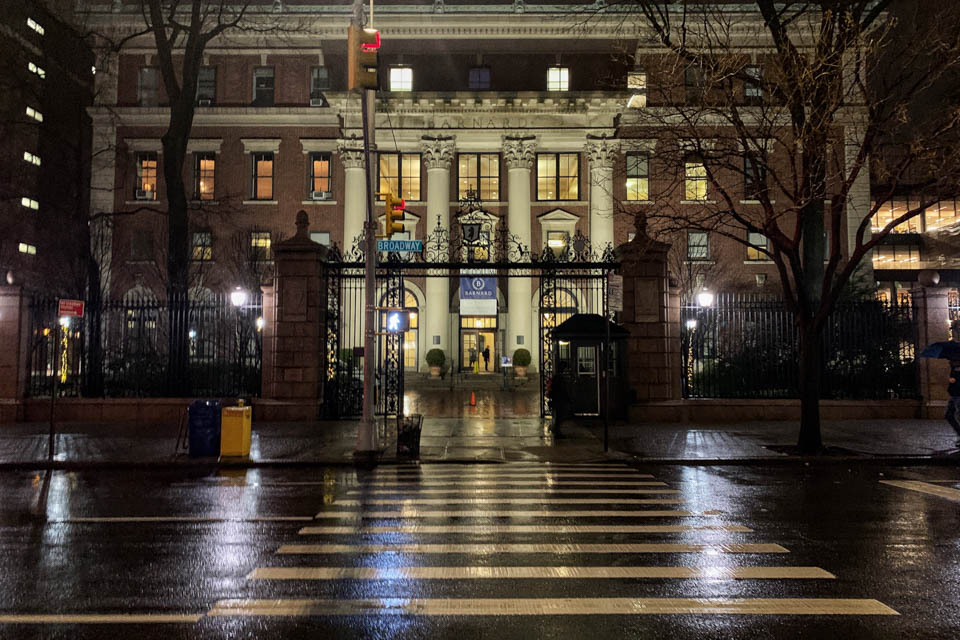 Only federally designated public health authorities, like the New York State Department of Health, have the authority to declare a quarantine, while institutions like Barnard do not.

Zhifan Yang, BC ’20, was absent for the first week of the semester—a time during which most students have yet to decide on their courses—in order to spend the Lunar New Year with her family in China. When she arrived back in New York on Jan. 27, Barnard suggested that students returning from China seek medical screening.

Days later, Yang received an administrative email recommending that for the following nine days she avoid contact with friends and suitemates, miss classes, and arrange meal deliveries. The email suggested that Yang self-isolate, urging her to “Stay at home, do not go out, not even for short periods.”

Only federally designated public health authorities, like the New York State Department of Health, have the authority to declare a quarantine, while institutions like Barnard do not.

Barnard’s initial “suggestion” soon became an expectation for all students who had been in mainland China since Jan. 19 to submit a form for medical evaluation. This announcement came alongside the federal requirement that American citizens returning from the Hubei province—the epicenter of the virus—after Jan. 19 self-isolate. Many students from mainland China that had arrived before Jan. 19 were also recommended certain safety precautions. Administrators said they would deliver two meals a day and provide room accommodations for students’ first 14 days in New York, withstanding the latency period for the coronavirus.

“We understood the school’s concern and I cooperated with the school,” Yang said, despite never stepping foot in Hubei.

While little is known regarding the ways one can contract the coronavirus, many students made the decision to comply with the self-isolation. Similarly, Hubei is currently under quarantine by the Chinese government in an effort to contain the spread of the virus.

A member of Residential Life reported to Deputy Dean of the College Natalie Friedman that Yang was absent from her room when they attempted to deliver food. Friedman informed Yang through email that in the event that she had left her room, she would face disciplinary actions in her violation of the Barnard Student Code of Conduct, which outlines guidelines for conduct that govern all those within the college community as well as sanctions for any violations of those standards.

“Before that email, I didn’t think anybody was monitoring us because I thought the isolation was voluntary. That email really concerned me. Since that email, I started realizing that this school did not understand this as voluntary,” Yang said.

In response, Yang notified the dean that she was in the room but had not heard the knocking. Barnard released a statement on Feb. 9 recognizing and apologizing for the harm done by the forceful language in Friedman’s email.

In a statement to Spectator, a Barnard spokesperson clarified that no disciplinary action would be taken against students who did not self-isolate.

Yang was one of two students who received threats of disciplinary action. The other student, Sylvia Su, BC ’22, received viral attention after she posted about her experience under quarantine on Facebook. Under Su’s Facebook post, Yang pointed to dozens of comments that villainized her opposition to the monitoring. The statement’s failure to mention the student’s voluntary decision to isolate left her vulnerable to criticism that “she is not following instructions,” Yang said.

“People think she’s not following the isolation, and people thought that she was mandated,” she added.

The most recent statement from Barnard recognizes a total of 13 students had “agreed to self-isolation,” affirming that they all have been offered assistance for “food, mental health support, and in coordinating coursework.”

Siqi Qin, BC ’23, arrived in New York days before Wuhan went under lockdown. As a resident of Yichang, the second-largest city in Hubei, she learned about an “unidentified disease” before the coronavirus was officially identified through expanding media coverage. Having arrived early to Barnard, she was only required to be medically screened.

Qin noted that “Barnard doesn’t have the facilities” to identify a carrier of the virus, and that even in the event of a quarantine, the confined spaces of Barnard would place students in close proximity to each other. Barnard assigned separate housing arrangements, it would be difficult to assign rooms based on the progress of quarantine timeline. Three suitemates in Yang’s arrangement were a day from ensuring they are likely not a carrier. It would take a week before the same could be said about Yang.

Alongside other Chinese students from Barnard and Columbia, Qin drafted an email to the Barnard administration saying that the college should provide—in addition to meals and academic accommodations—education on the coronavirus in light of a series of anti-Chinese incidents at Columbia. The email listed ways Barnard could ensure a safer community for Chinese students, including explaining the cultural norm of Chinese people using masks for public health practices.

“With the number of confirmed coronavirus cases continuing to increase in China, this is the moment we need support from our community the most. We are proactively asking the college to take action not only because we are Chinese, the victims in this case, but also because we believe that racism towards any cultural or ethnic group on campus undermines the college’s core values,” the statement said.

Xinle Hou, BC ’22, also authored the email. She did not return to China for the winter break, so she did not need to self-isolate, but many of her friends were confined to their rooms. At the same time, a number of people she knows—including her own neighbors in China—have contracted the virus. She said she doesn't believe that Barnard’s public messages mandating Chinese students take prevention measures was a “good omen” to send to a community that does not understand the realities of the virus.

Hou also attended a discussion held by the Office of University Life regarding the coronavirus, which she hoped would foster an understanding of the challenges that Chinese students face. Following the event, she said this did not seem to be the case.

“The majority of people who attend the forum are Asian. The people who are saying racist, biaseded statements aren’t Asian,” Hou said. “Information is not delivered to the people who have not received it.”

Student demands have been highly visible to the Columbia community through student emails, submitted op-eds, and viral Facebook posts. However, Hou said that what she deemed as the failure to provide physical, emotional, and communal support indicates those conversations have not successfully circulated around those who have not been directly affected by the coronavirus.

“I feel like [Barnard] will feel the obligation or pressure to [take action]. I’m just not sure if the method is going to be effective,” Hou said, thinking about the administrative responses to Chinese student concerns. “They will probably just send another list of people and contacts.”

ADVERTISEMENT
From The Blog

Newsletter
Sign Up For SpecNewsletters
Get the latest news and top stories delivered to your inbox.
Related Stories
ADVERTISEMENT